The full edition of Advanced Checkers 2 is right around the corner! Follow me on itch for updates on the full game.

For now, enjoy the 6 page express edition, made for quick games in dark rooms. Have fun!

The whole game can be played with any standard checkers set, pens, paper, & just a bit of tape. You & an opponent will take on the roles of two lesbians who are very attracted to one another as they try to figure out how to express their desires. A single game takes 15-45 minutes to play— things can go as easily or as excruciatingly as you like.

You & your opponent gain points by taking each other’s checkers, reflecting the growing overtness of your romantic advances. After having scored exactly 11 points, your character has effectively communicated their interest & can end (or prolong) the encounter as they wish.

However, if your score is ever higher than 11, your character has come on too strong or awkwardly. This results in your character getting too flustered, frightened, or feckless to initiate anything, & your opponent getting to determine how the encounter ends (or doesn’t).

New character sheets give you more tools to use while roleplaying, without adding any additional, complex rules. The game is expanded, but remains as sleek as ever.

2 included scenarios to get you started quicker

Made by a hot girl

As you read the rules, just imagine how super hot I am. If your eyes pop out of your skull like an old-timey cartoon, you're imagining correctly. So there's no way I don't know what I'm talking about here, this is 100% accurate flirting. 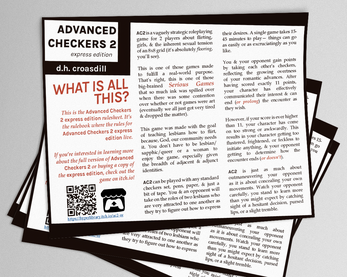 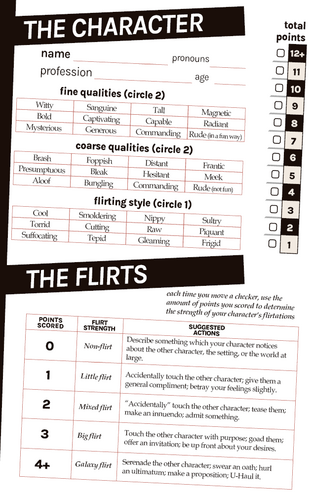 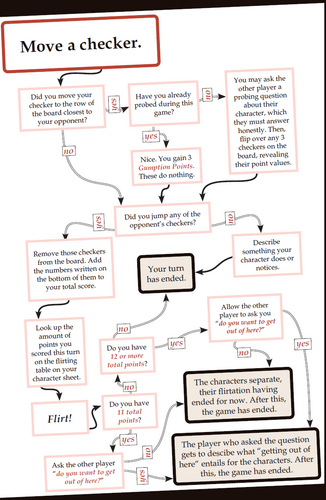